Mohe, a county in Heilongjiang province at the northern tip of China, is famous for Beiji Village, known as China's "Arctic Village".

The county is one of the few places in China with a subarctic climate - long, severe winters and short, warm summers. Winter begins in early to mid-October and lasts until late April, and it is the coldest place in China, holding the record for the lowest temperature, - 52.3 C in 1956.

But if the climate suggests an inhospitable place, nothing could be further from the truth. China's frontier with Russia has a raw beauty that attracted more than 1 million tourists last year, although most visited in summer to witness the amazing aurora borealis, or northern lights.

Beiji Village, 88 kilometers from the county seat, attracts almost all of the tourists landing at Mohe, and it boasts China's northernmost bank and post office, as well as a painted line marking 53�� 29' latitude, the northernmost point in China.

Tourists can look out on the border with Russia from the village and observe the aurora borealis on Shenzhou Beiji Square during summer, when daylight can last up to 20 hours.

"More and more north-finders make the small village a hot spot in summer and winter," said Li Xu, 28, who runs a youth hostel on Heilongjiang Avenue, the most prosperous street in Beiji Village. 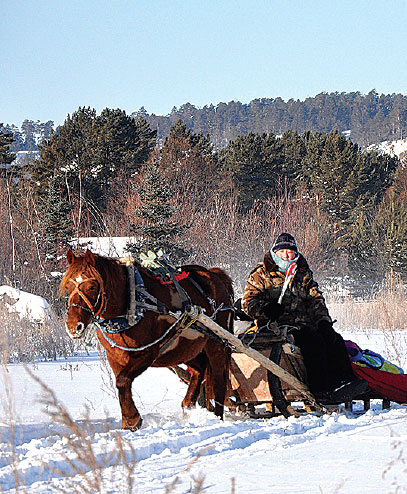 The beauty of the snow-covered landscape can be enjoyed by taking rides on horse-drawn sleds.

Li hails from Jiagedaqi, a county 500 km away. He was attracted by the beautiful scenery of Beiji Village during his first visit in the summer of 2011.

One year later, he opened his first youth hostel with 25 beds.

"I wanted to stay here to explore China's extreme north, and it is also the closest tourist attraction to my home," Li said.

His hostel attracted nearly 1,500 travelers last year, most of whom were young college students or white-collar workers.

He expanded the hostel last year to accommodate 84 travelers at any one time, and he said he expects more than 6,000 visitors this year.

"On the first floor, we provide books, game props and a large space for tourists from different parts of the world to meet," said Li. "During my spare time, I join them and have made countless friends from all around the world."

Feng Haixiang, 38, a department manager of a technology company in Shenzhen, Guangdong province, said: "This visit is my first to Heilongjiang. It's really cold here. I have never experienced anything like it before, but it's amazing. I have seen the natural beauty of the landscape and I think it is the real Heilongjiang.

"I have learned that it has a different appearance in summer, so I hope to have the chance to return with my family in summer."

In 2012, the first Christmas Village in Asia, 25 km from the center of Beiji Village, was completed and opened during the festival period.

Sture Borgar, 63, the eighth Santa Claus, came to China in December, immediately after he passed the exam in November.

Every day he dressed up as Santa Claus, posed for photographs with tourists, and wrote greetings on postcards bearing the signature "Santa Claus".

"This is my first time in China, and it is really a fantastic experience for me," said Borgar. "I have a good time with the tourists, and I am excited that they love me."

The Christmas Village has turned out to be a successful event.

"In 2014, we welcomed more than 300,000 visitors. Most of them came here to see the real Santa Claus," said Zuo Jinling, the manager of the Christmas Village.

Just 100 km away lies another tourist spot - the village of Luoguhe, a charming collection of snow-covered cottages with smoke curling from chimneys. It developed much later than Beiji Village and has become a popular summer boating destination, due to its location at the mouth of the Heilong River, which marks the border with Russia.

Yu Leshui, 52, runs a restaurant with her husband.

"In 2011, we opened the restaurant because of the increasing number of tourists," said Yu. "Most of the travelers come from southern cities, such as Guangzhou, Shanghai, Chengdu and so on, and they welcome the dishes with distinctive northeastern flavors, so my business has developed quickly."