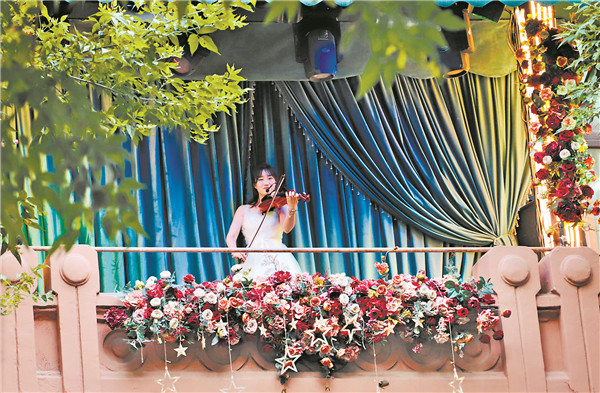 A violin performance is staged on the balcony of the Modern Hotel on Harbin’s Central Avenue. [Photo/MY399.COM]

A wonderfully romantic series of music concerts staged from hotel balconies recommenced on Aug 10 in Harbin – capital of China’s northernmost Heilongjiang province – in a bid to promote summer tourism in the city, according to local officials.

The annual concert series, featuring musical performances and dances in front of the city's Modern Hotel chain, had been postponed this year due to the outbreak of the novel coronavirus epidemic.

The organizers said that compared with previous concerts, this year’s balcony music concerts were held at one main venue and at a second venue.

The main venue, on the balcony of the Modern Hotel on Harbin’s Central Avenue, features a violin, accordion, saxophone and even has ethnic dances.

The other venue on Harbin’s West Badao Street has the theme of romantic relationships, featuring romantic music.