Cool off in Harbin 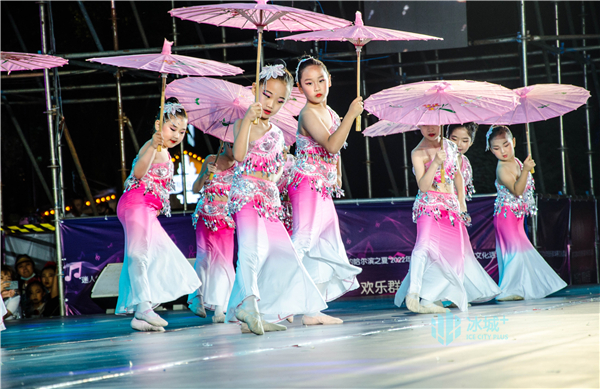 A dance is performed in Harbin for tourists. [Photo/Ice City Plus]
Harbin, capital city of Northeast China's Heilongjiang province, is rising in popularity as a travel destination.

When people think of Harbin, they usually think of its gorgeous ice and snow sculptures and rich winter recreation opportunities during its annual Harbin International Ice and Snow Festival, which has become one of the world's four largest ice and snow festivals.

But there are plenty of other reasons to visit the city. From its Russian architectural styles and multicultural delicacies, splendid wetlands, mountains, rivers and well-preserved cultural relics to its Siberian tigers, it offers something for everyone.

Harbin lies at the same latitude as Montreal and has four distinct seasons.

The city’s cool summer makes it a popular place to escape the summer heat. Harbin was granted the title of "best summer resort city" during the first China Summer Resort Industry Summit.

According to the big data report on summer holidays released by China's leading online tourism platform Ctrip in 2021, Harbin ranked the first among all cities in the country for summer tourism.

Night sightseeing along the Songhua River and Harbin's ancient blocks is among the most popular travel items in the city.

Additionally, around 100 performances will be staged during the summer holiday in Harbin as part of the city's annual charming summer event.