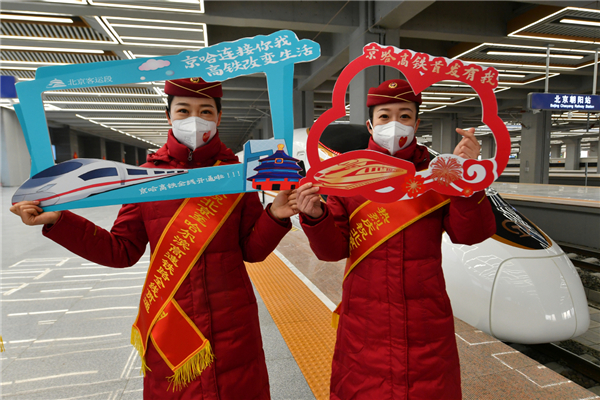 The last leg of a high-speed railway connecting Beijing with Shenyang, Changchun and Harbin-the capital cities of China's three northeastern provinces-will open on Friday, enhancing connectivity between Northeast China and other parts of the country, China Railway Corp, the national railway operator, said on Thursday.

The 1,198-kilometer line passes through Beijing and the provinces of Hebei, Liaoning, Jilin and Heilongjiang.

Trains running on the line will initially travel at a top speed of 300 kilometers per hour, the company said, but its maximum designed speed is 350 km/h.

A section of the route, from Harbin to Shenyang, Liaoning, was put into operation in 2012. Another section from Shenyang to Chengde, Hebei, began service in 2018. The 192-km section from Chengde to Beijing opened on Friday.

Most of the southbound services will terminate at the new Beijing Chaoyang station. 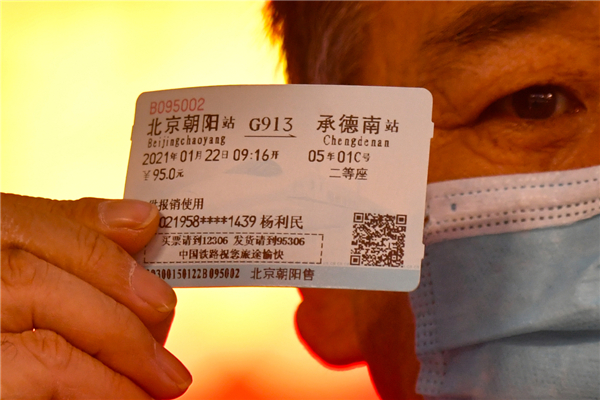 A passenger shows his ticket on the train linking Beijing and Harbin, capital city of northeastern province of Heilongjiang, Jan 22, 2021. [Photo by Sun Lijun/chinadaily.com.cn]

The north-south line is important to China's high-speed railway network, providing a further link between Heilongjiang, its northernmost province, and Hong Kong in the south via the Beijing-Kowloon high-speed line.

Su Yao, who lives in Harbin and travels to Beijing from time to time, said she will "definitely have a try".

"I've waited for the opening of this line for a long time," she said.

"The fastest bullet train between Beijing and Harbin previously took more than seven hours and it was quite long for me," she said, adding that she's looking forward to a trip that will take less than five hours.

"This service is perfect," she said.

"I have to arrive at the airport at least one and a half hours before departure, which is quite time-consuming compared with travel by train. If I take the train, half an hour in advance should be enough," she said, adding that when the COVID-19 pandemic "cools down", she will try the new high-speed train service.

China Railway Corp said the new line will also increase freight capacity and better link the traditional industrial hubs in the northeast with the Bohai economic rim, promote the coordinated development of Beijing, Tianjin and Hebei, and facilitate the revitalization of the northeast. 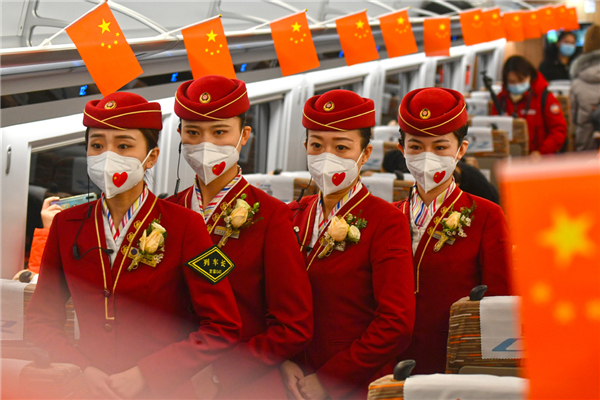 Train crew members stand in line aboard to welcome passengers on the high-speed train linking Beijing and Harbin, capital city of northeastern province of Heilongjiang, Jan 22, 2021. [Photo by Sun Lijun/chinadaily.com.cn]