Beijing-Harbin HSR in service for 100 days 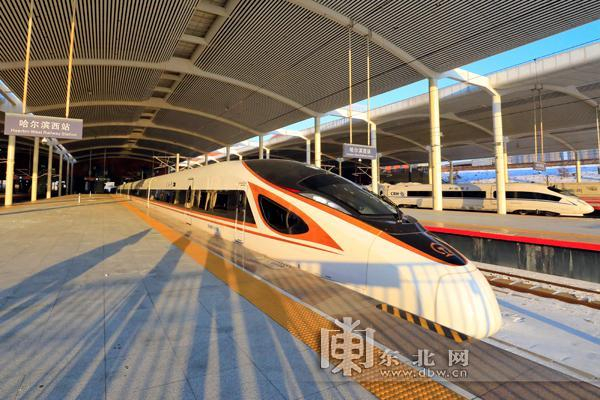 A Fuxing train running on the Beijing-Harbin High-speed Railway gets ready to pull out of the Harbin West Railway Station. [Photo/dbw.cn]

The new Beijing-Harbin High-Speed Railway -- which operates in North China at high latitudes and at low temperatures -- has now reportedly been in service for 100 days.

The 1,198 kilometer-long line connects Beijing to Harbin city, which is located in China's northernmost Heilongjiang province.

The new railway service is expected to forge a closer link between the national capital and the northeastern provinces of Liaoning, Jilin and Heilongjiang.

With a design speed of 350 km per hour, the service is estimated to shorten the travel time from Beijing to Harbin to 4 hours and 52 minutes -- 1 hour and 40 minutes less than the previous fastest railway route.

The first section of the route -- extending from Shenyang, capital of Liaoning province, to Harbin -- went into operation in 2012. The section from Shenyang to Chengde in North China's Hebei province began service in 2018.

The final 192-km-long section -- running from Beijing to Chengde -- began operating on Jan 22 this year.

During the initial operation stage, a total of four pairs of high-speed trains ran on the Beijing-Harbin HSR every day.

Currently, the number of trains running on the railway has been increased to seven pairs per day, to satisfy customer demand.

Passengers trains that used to run on the conventional railways between Harbin and Beijing have now been switched to the Beijing-Harbin HSR, resulting in the cargo transportation capacity of the line  between the two cities increasing by 10 percent.