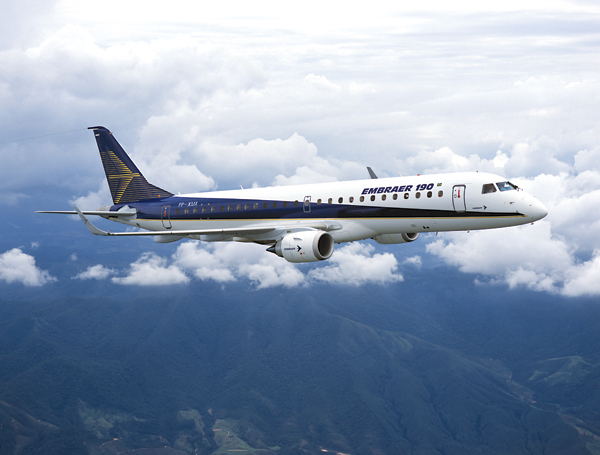 Embraer's E 190 in flight. China has a large market for the air carrier maker. [Photo provided to China Daily]

While soybean and minerals are attracting wide attention in trade between China and Brazil, Brazilian aircraft are enlarging the country's share in the Chinese market.

By the end of April 2013, Brazil's leading aircraft manufacturing company Embraer Commercial Aviation had delivered 136 planes to China, extending its coverage of the regional aircraft market to 80 percent.

"Second only to the US, China operates the largest fleet of Embraer commercial aircraft in the world," Paulo Cesar Silva, president of Embraer, said during the China Regional Aviation Forum 2013, held in the Inner Mongolia autonomous region.

The International Air Transport Association predicted that China would become the world's second largest aviation market in 2017, which is regarded as a great opportunity by some of the world's major aircraft companies, including the Boeing Co and Airbus.

Since then, several major deals were completed between China and Brazil, including the purchase of 30 jets worth of $1.2 billion in 2011 by CLC Corporation, the leasing arm of the China Development Bank.

These airplanes were provided to China Southern Airlines for operation in the Xinjiang Uygur autonomous region to complete air travel routes in Northwest China.

Also in 2011, Hebei Airlines agreed to purchase 10 jets from Embraer as a way to strengthen its airlines in Hebei province.