3-day tour in Harbin: Where the East and West meet

Editor's Note: Transit passengers from 53 countries including the US, Canada and all members of the EU can spend up to 72 hours in Harbin without a visa. This visa-free policy allow foreigners from these 53 countries with visas and plane tickets to a third country to transit through Harbin for a visa-free stay of up to 72 hours. The below provides a suggested itinerary for a 3-day trip.

Harbin, capital city of Northeast China’s Heilongjiang province, is rising in popularity as a travel destination for tourists from home and abroad.

When mentioning travel to Harbin, the images that come to people's minds must be the gorgeous ice and snow sculptures and rich winter entertainment options during its annual Harbin International Ice and Snow Festival—which has become one of the world's four largest ice and snow festivals, along with the Sapporo Snow Festival in Japan, the Quebec Winter Carnival in Canada and Norway's Ski Festival.

Harbin gained attention from the world on the stage of the 2017 CCTV Spring Festival Evening Gala as one of its hosting locations.

But there are plenty more reasons to want to come here. From Russian architectural styles and multicultural delicacies, splendid wetlands, mountain and river scenery and well-preserved cultural relics to Siberian tigers, there's sure to be something for everyone in the city. 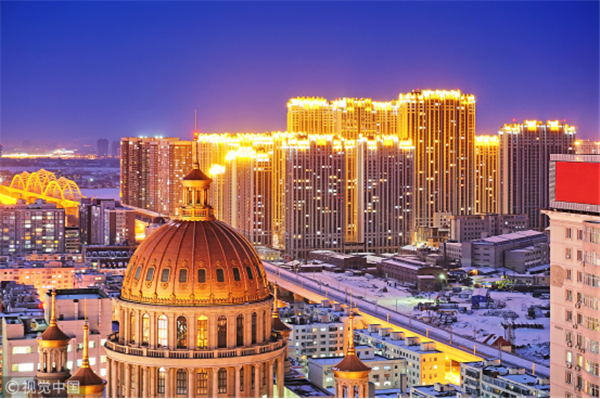 Harbin is the cradle of the Jin and Qing dynasties.

The Jin Dynasty (1115-1234) established its capital in the city, today known as Acheng district, a name from the Manchu language that means honor.

Authentic northern ethnic groups’ culture and history are deeply rooted in the city.

Harbin is also a city possessing a strong exotic flavor, which has combined both the history and the eastern and western cultures of its northern ethnic groups. It has helped Harbin earn the nicknames “Eastern Moscow” and “Eastern Paris”, amid others.

The construction of the Middle East Railway (from 1896 to 1903) brought an influx of foreign immigrants which boosted business and bolstered the financial district. Architecture in Russian style and combination of traditional Chinese northern architecture and Baroque styles sprung up in the period, along with local delicacies like red sausage, "great lieba" bread and fermented beverage kwass - which integrates eastern and western cuisines.

The Harbin Central Avenue is an ideal place for food lovers to taste authentic Russian delicacies in its numerous Western restaurants.

In addition to a rich diversity of landscapes, Harbin is also a good place to enjoy river and wetland scenery.

Songhua River, one the largest seven rivers in China and the largest tributary of Heilong River, passes through the downtown section of Harbin, creating breathtaking river scenery and vast wetlands along the river. Hulan Estuary Wetland Park is a must-visit destination combining the two types of scenery.

Harbin’s other two nicknames are “Ice City” and “Summer Capital”, so we can surmise that winter and summer are the best seasons to visit Harbin.

Harbin lies at the same latitude as Montreal and has four distinct seasons. Outdoor winter temperatures can dip below -30 Celsius, so it's important to keep warm.

The cool summer in the city makes it a popular place to avoid the summer heat. Harbin was granted the title of “the best summer resort city” during the first China Summer Resort Industry Summit in July.

China Daily recently planned a 72-hour trip in Harbin in its two seasons for visiting. Even if you only have three days in Harbin, you will have a pleasant experience following the trip routes.